Unique peace festival at the school for the blind in Lebach 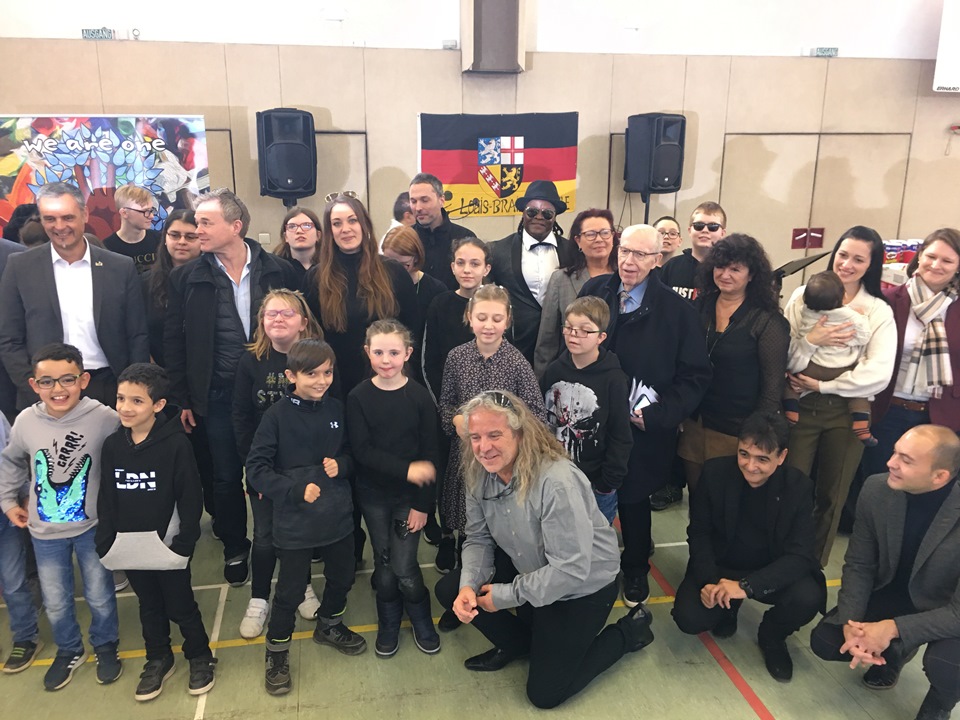 As of today, 11.11.21 is redefined in Lebach. This day goes down in the history of the Louis Braille School.

Unique touching moments: students overflowing with joy, guided by a loving hand. Adults who are so moved by joy that they are at a loss for words. We experienced this firsthand at the school for the blind in Lebach.

A gathering of people, big and small, musicians, teachers, students, ministers, musical composers, entrepreneurs, parents, press or zoo directors. Lived diversity at its best. What a great moment for all participants.

The focus was on the Werner Zimmer Peace Chain, which was extended in Lebach with the aim of eventually being in Berlin and from there going to Rome. This special chain, which has its origins in soccer, stands for peace, love and conscience. The jerseys are signed by the individual ambassadors and then chained together to extend the chain, which is already kilometers long.

This was the first joint event of the DIBK, the German-Italian Institute for Education and Culture, represented by its president Giacomo Santalucia and his team, and the Voice Aid Association, represented by its president Astrid Arens and Mr. James Williams as vice president. Together they want to create from now on an international chain of trees that will stand up for the environment and the protection of the planet.

The first step was a carriage ride with the children to the Mercedes Autohaus Hachfeld, where the children were warmly welcomed and pampered by Mr. Frank Hachfeld and Mrs. Maria Kreutz.

At the school, Frank Nimsgern, musical composer, and Sophie, a blind student who loves playing the piano and is very empathetic to music, opened the event. Sophie and Frank Nimsgern directly enchanted their audience with their wonderful song. Soprano Elisa Wehrle also joined in and sang along with Frank Nimsgern. A real ear candy.

The next step was to go to the school gymnasium, where the students of the school for the blind, under the direction of Dieter Biehl, had rehearsed a song by the Weather Girls: “Stand up”. A great performance that was a lot of fun and joy.

Mr. Reinhold Jost, Saarland Minister for the Environment and Consumer Protection, was the laudator. He was visibly impressed by the students’ commitment and promised the school direct support from the state.

Mr. Sven Görgen, head of the school for the blind in Lebach, moderated this event and welcomed Mr. Klauspeter Brill, local mayor, who motivated the students very much. Reiner Calmund appeared as guest of honor and inspired with his incomparable charm and humor.

Mrs. Astrid Arens, President of Voice Aid Association, made it clear that the real VIPs in this hall are the students themselves. She announced another event and, on behalf of Zoo Director Prof. Fritsch from Neunkirchen, invited all the children to the first tree planting of the international chain of trees that will connect all the zoos of the world, for the sake of people, the environment and the planet.

DIBK President Giacomo Santalucia added to the remarks and announced an event in February 2022 in the partner school for the blind in Neuwied, whereupon Sven Görgen directly agreed to join with his children.

Now followed the honoring of Frank Nimsgern, Sven Görgen and Dieter Biehl as ambassadors of the Werner Zimmer Peace Chain. Each got his own jersey to sign. After they were connected with the chain of already existing jerseys, all students went outside to the place of light.

In this special place the tree named Leonardo was planted on the occasion of the youngest member of the Peace Chain, the 8-month-old son Leonardo of the couple Carmelina and Francesco Furnari.

Finally, everyone gathered in the gym once again to sing together. The Louis Braille School student choir sang a song about Saint Martin with Sophie as the special vocal part, and James Williams joined the students in singing the Voice Aid anthem “We Are One.” It motivates, stimulates and calls for direct action.

Looking around now, one could see very touched, happy children’s eyes, who had a lot of fun and created a day full of great good memories. Everyone present was very impressed by the variety of performances and the people who put on such a special program.

A day that makes history. We sincerely wish the students and social educators of Lebach many more such moments.