In: Events
Germany's biggest inflatable race enters the 10th round 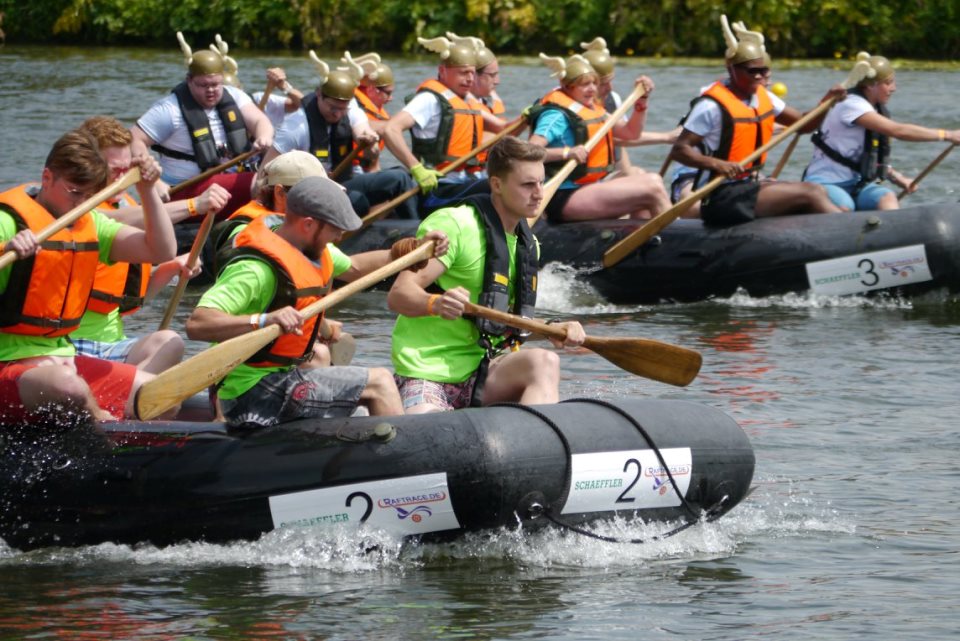 Schweinfurt is upside down! On 24.06.2018 the annual biggest inflatable boat race in Germany takes place, at the Gutermann Promenade. Around 500 paddlers and over 6,000 spectators and fans lined the banks of the Main to take part in this unique spectacle. A very special festival awaits you this time. For the 10th anniversary of the Rotarian Rowdy River Raft Race, the organizers have come up with some special highlights.

In addition to the traditional “Schaeffler Water Challenge”, which has unfortunately been cancelled, the “Amphicar Regatta” and the “Bull Riding”, there is a top fashion show with national flair for the anniversary. Rotarian Katja Luise Meißner had the idea. She is a well-known figure in Franconia when it comes to fashion, design thinking and international trade fairs, both online and offline. She initiates the first open Gernerations Model Casting in Mainfranken. Special guest and jury member at the casting is Regino Hawich. The Berliner is a former partner and fashion choreographer of “pop star maker” Detlef Dee Doost and former choreographer of Guido Maria Kretschmer for Fashion Week Berlin over several years. 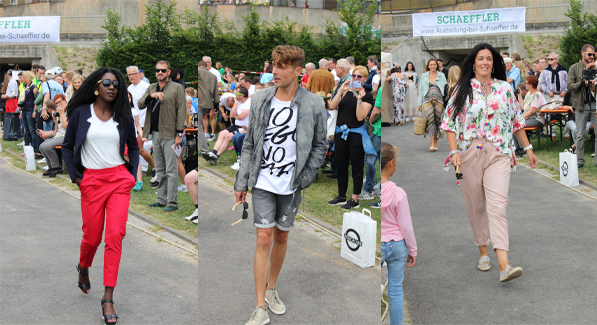 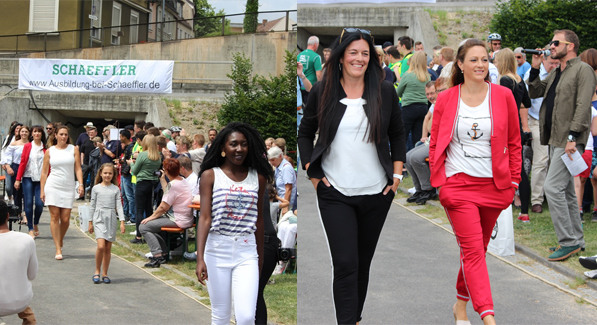 On 10.06.2018 a casting of the models took place in the fitness center of Petra Lurz. 12 women, men, girls and boys of different styles were cast and had the chance to have their first catwalk. The fashion pieces of Underground, Schweinfurt, and Ketu, an up-and-coming fashion label from Berlin, were presented. 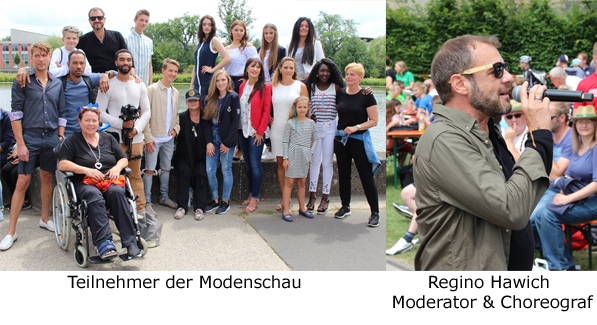 What was already clear at that time was that Regino Hawich was inviting some of these models to Fashion Week in Berlin on July 3, 2018 under the motto: European Union – Sustainable Fashion Festival. For this he is chief choreographer. This international fashion show is initiated by Rabih Rabea Hijazi, marketing director of Xegara. At the same time Regino Hawich brought along his new music shooting star Fodé, who promoted one of his inspiring songs. According to Katja L. Meißner: “An incredible opportunity for the young models. I keep my fingers crossed for them”. Meanwhile it is considered as certain that 7 models will go to Berlin. 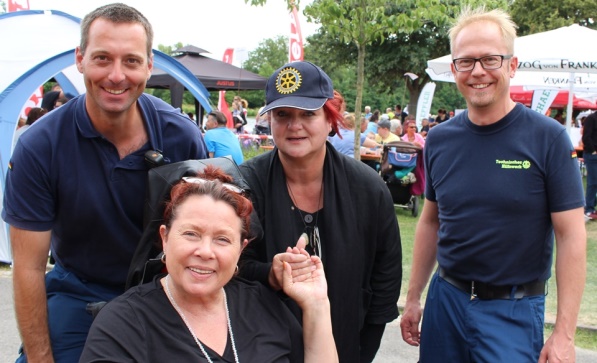 In addition to thousands of enthusiastic spectators who cheered on their teams loudly, it requires people with heart and soul to support such events on a voluntary basis. This includes the THW – Technisches Hilfswerk Schweinfurt. Harald Lotter (conductor of the THW) and Carsten Dotzel (chairman of the THW helper association) said: “We provide the technical support for such events. The people are often unaware of what we do and the human commitment behind it. In 2017, each of the helpers spent an average of 165 working hours on social commitment. We are a team that is happy to make others happy. The smile on people’s faces is the most beautiful reward for us.

What would such an event be without appropriate sponsors?

The premium sponsor of this event was Schaeffler AG, which has been intensively supporting the Rotarian Rowdy River Raft Race for years.

For Riedel Bau, the Schweinfurt-based company that has been in business since 1899, it is, according to Christina Fraase, head of marketing: “an honour to be there. It’s a great combination: to do something for a good cause, which is very important to us in the company, and on the other hand to create a team event, since we are all in the same boat. We have a very good working atmosphere and put together 3 teams – 1 women’s team, 1 construction management team and 1 trainee and student team.” 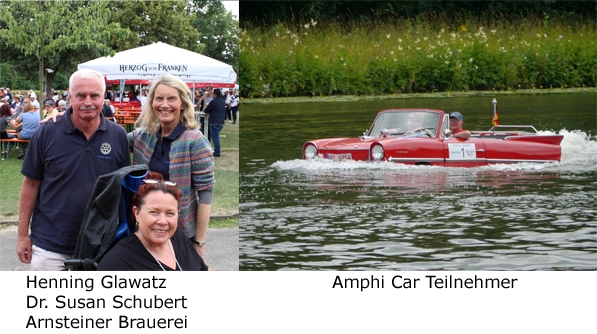 Another sponsor is the Arnsteiner Brauerei with its leading brand “Herzog von Franken”, which is managed by Dr. Susan Schubert, owner of the brewery in the 10th generation, and her husband Henning Glawatz, past president of the Rotary Club Schweinfurt – Peterstirn, who says: “The special thing about these brewery products is that the ingredients for the production are all purchased in the region, we live from the region for the region of Lower Franconia”. Dr. Schubert adds: “Our beer is brewed by hand, a craft beer. The individual production processes are all controlled manually. We have an incredibly beautiful old copper brewhouse, which makes the difference in quality, which our customers appreciate very much. We deliver only in glass bottles, for the sake of the environment, and are the answer for anyone who wants to remain faithful to his home.” 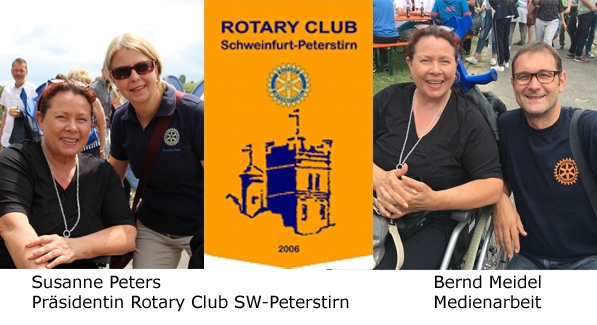 Bernd Meidel is responsible for media relations and the raft racing event at the Rotary Club Schweinfurt-Peterstirn. He tells us about his history: “I met Rowdy Rafting Race in the US-American Armed Forces, just like Silvia Joiner, the mother of Raft Racing”. She organized this event until 9/11 under the US-American flag. According to Silvia Joiner, “It was wonderful that this event was revived among Rotarians.” Bernd Meidel took the chance when he became club president and rebuilt this event together with Silvia Joiner and his club mates. With a resounding success, as you can see. “In the meantime, we have raised 130,000 € over the years and supported over 50 different institutions and charitable projects.” 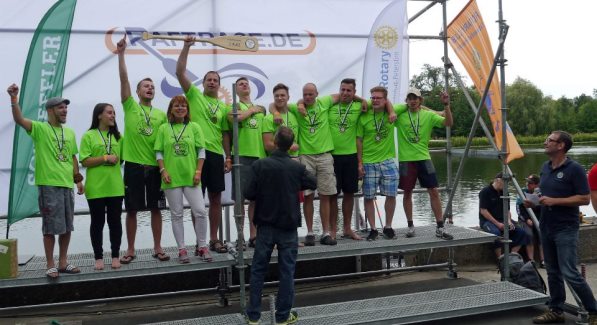 The patron of this event was Sebastian Remelé, Lord Mayor of the City of Schweinfurt. Quote: “I would like to take this opportunity to thank the Rotary Club Schweinfurt-Peterstirn and all committed helpers. Without their dedication, such a fabulous organization would not be possible.”

The Rotary Club Schweinfurt-Peterstirn would like to thank its premium sponsor Schaeffler for its support, as well as the Bundeswehr, THW and Wasserwacht Sennfeld/Schweinfurt, and all sponsors and helpers. We had 300 helping hands just on Sunday.