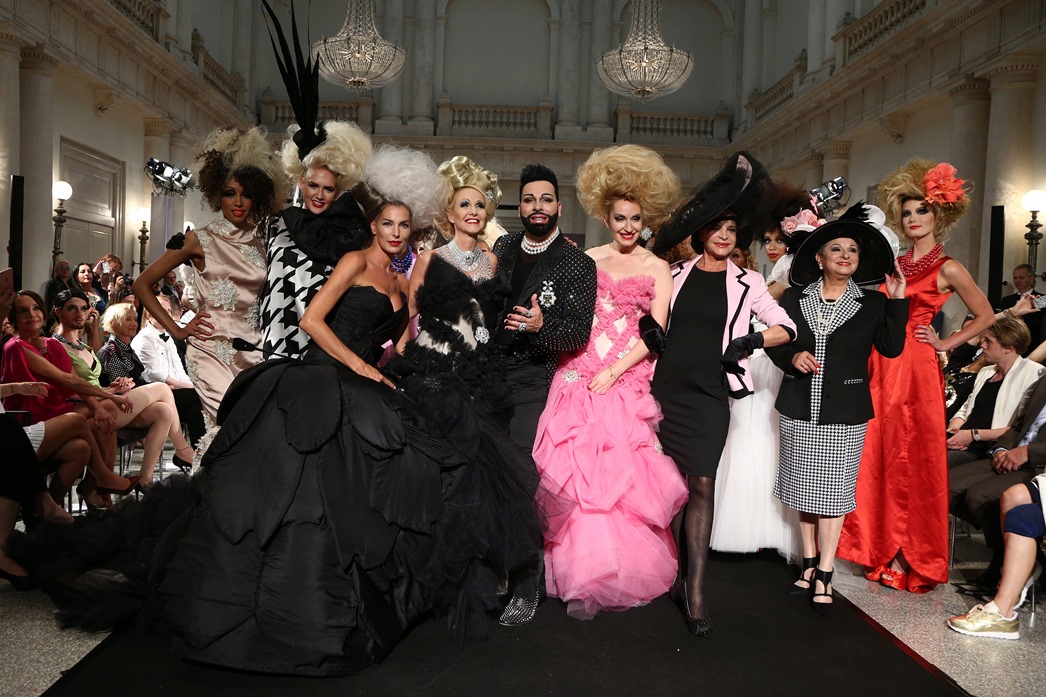 With Prussian discipline and creative free spirit he creates his POMPÖÖS lifestyle world, in which the striking POMPÖÖS crown is his trademark and he sees himself as a living object of art. He likes to give everything a „pompous“ touch and wherever possible the designer adds a second „ö“, which led to the name „The Prince of POMPÖÖS“. So he reaches for the designer crown.

HARALD GLÖCKLER became known through his eccentric appearances and spectacular couture shows with top-class world stars around the globe, among others in Hong Kong, London and St. Moritz.

HARALD GLÖCKLER is an all-rounder and selfmademan. He stands for absolute perfectionism, iron discipline, beauty, extravagance, uniqueness, courage, glamour and joy in life, as well as fun in thinking differently. Because he is different from others.

He follows his vocation according to his motto „Every woman is a princess“.

It all started with a fashion store in Stuttgart. In the meantime HARALD GLÖÖCKLER is known in over 80 countries and is represented with his products. Besides fashion in the prêt-à-porter and couture sector, HARALD GLÖÖCKLER also designs jewellery, homewear, perfume, bags and accessories, interiors, wallpaper, porcelain, chocolates, home textiles, animal accessories and even houses. His range is almost infinite and his success proves it right.

His newest project is a book with the title „Fuck you, Brain“, appeared in the Plassen publishing house, which is presented for the first time on 14 October, by HARALD GLÖÖCKLER personally (11-13 o’clock) on Frankfurt book fair. Note the slogan on the cover: „Be everything – except ordinary“. With this book HARALD GLÖÖCKLER would like to obtain motivation tips from his life and give the impulse to break out of our own „prison of thinking“. He motivates us to be what we really are and to do what we want to do. Spare yourself thoughts like „I am too small, I am too poor, I am too weak“ and rethink: „I want to live, I’m successful, I’m special“.

For the master of the art of living Harald Glööckler (52), nothing is unthinkable, everything is possible.

That becomes particularly clear with his second book, which he will handsign subsequently in the time of 13-14h, also at the Frankfurt book fair – the Bible with a slipcase designed by HARALD GLÖÖCKLER. On behalf of the Protestant Church and the German Bible Society, he created this unique Bible slipcase for the anniversary edition of the Luther Bible. „It just came at me. I had the idea of representing paradise. I wanted to show people what wealth looks like in the fullness of nature and fullness is God. He wants us to live rich. That’s why I just put myself on top of the barn. Anyway, the church liked it, because the bible is supposed to win people.“ 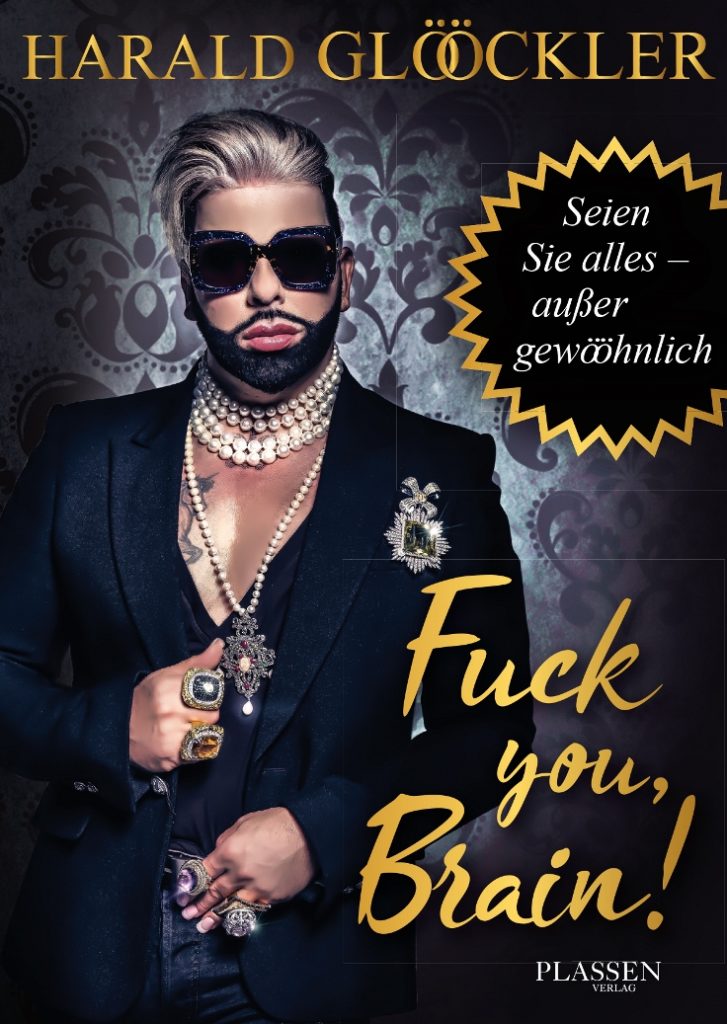 Glööckler also attracts attention as a speaker in churches. In Hahn near Frankfurt he held a service outside the usual church environment, in a cinema with 600 visitors. „The church dreams of such numbers of visitors,“ says Glööckler. Another service followed in Mannheim with over 400 visitors. A complete success.

If you listen to him for a while, it becomes clear that he radiates an enormous amount of wit and esprit. He is charming, stylish and friendly and courteous in every situation. He was born on 30 May 1965 in the zodiac sign of Gemini and is happily married to his long-time partner Dieter Schroth.

If you look at his designer robes, it becomes very clear what he thinks of the female world. To him, every woman is unique. Regardless of whether they are thick, narrow, large or small. Women are special. „They feel that I mean it honestly,“ says Glööckler. He himself can be professionally painted for official events. An absolute perfectionist with a penchant for perfection. Everything is carefully planned and staged. Discipline is one of his greatest virtues. The fashion shows of the „Maestro“ are the purest work of art. Harald Glööckler is known for his glamorous creations and this year celebrated the 30th anniversary of his fashion label „Pompöös“. 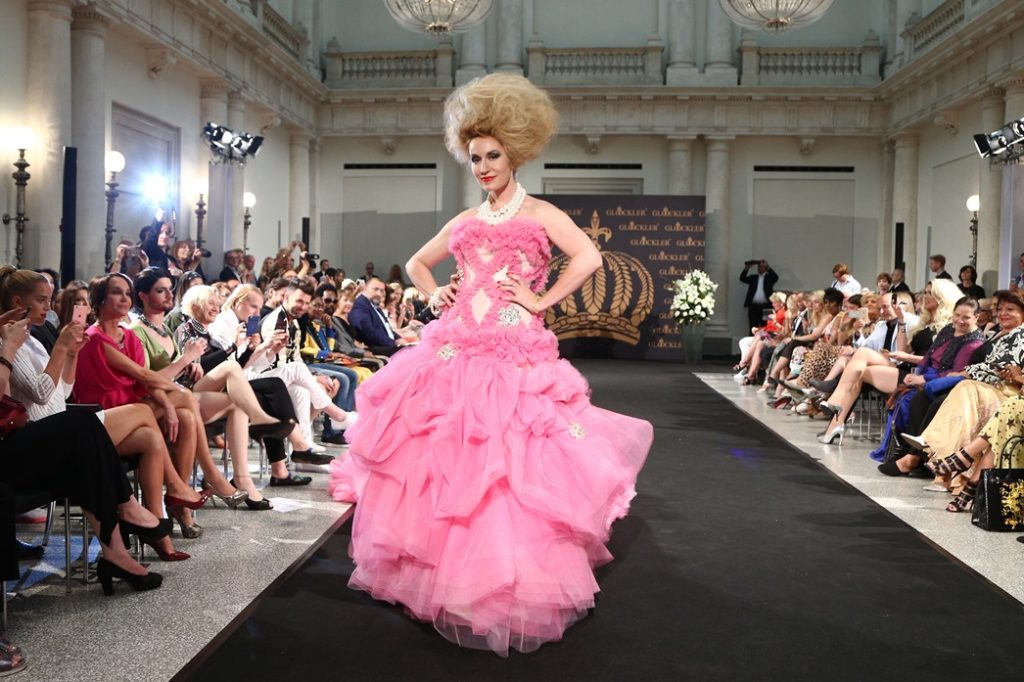 According to Harald Glööckler „people have an incredible hunger for glamorous personalities“. Anyone can do it easily, that’s why it applies to him: „Be everything – except ordinary“.

Also Astrid Arens, „The VOICE“ – international expert and speaker for (neuro-) communication & editor of the Business Voice Magazine underlines Harald Glööckler’s statement. „People love stories, they want to be taken away to other worlds in order to break out of their existing worlds of thought.“ It is still true: „a picture says more than 1000 words“. 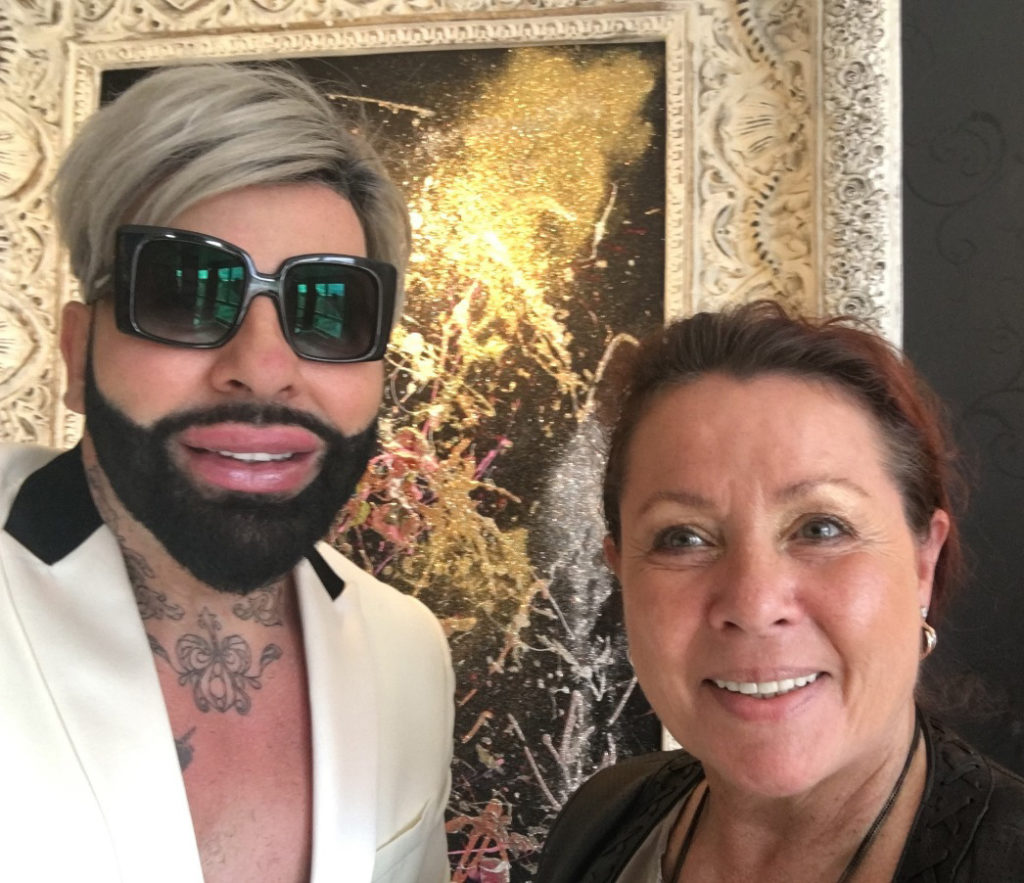 Queen Elizabeth II and our Chancellor Angela Merkel are real icons of style for him. These ladies have found their way, are dressed appropriately at all times. His statement: „more than satisfactory“.

But HARALD GLÖCKLER is not only active as designer, book author and keynote speaker, but he also paints passionately gladly and creates works of art, which look for their-same. Countless paintings and sculptures bear witness to his creativity and inspire not only young and old, but also the expert art scene itself is highly astonished and delighted. In his brilliant art book „GLÖCKLER explosion“ his works are bundled in an impressive way and ignite a true emotional firework in the eye of the viewer.

Internationally renowned greats of the art scene describe his art as follows:

„GLÖCKLERS art screams, it wants to be seen, it is passionate and extravagant“, praises the art historian Julia Pfeffer the works of the creative genius. Prof. Dr. Helge Bathelt of the Verein Bildender Kunst und Kultur in Germany goes even further: „Obviously he belongs to the ranks of Warhol, Lichtenstein and Jeff Koon.“

His pictorial art in the form of abstract painting is characterized by strong colors. Magnificent frames are skilfully staged.

But despite the whole glamour stands for HARALD GLCKLER also the good purpose in the focus and is a affair of the heart. His latest project shows painted horses at the racecourse in Baden-Baden. Glööckler was auctioning a horse for the benefit of United Charity and children in need. The group of horses receives great attention and is an absolute enrichment for the Grand Prix Ball in Baden-Baden, which took place on 02.09.2017.

Another milestone for the star designer is the patronage of the Frankfurt Style Award 2017, which will be presented in November. Hannemie Stitz-Krämer, Managing Partner of PRP Kronberg and initiator of the Frankfurt Style Award, is overjoyed to have won Harald Glööckler for this event. The partner country this year is America. Over 600 designers from 20 countries present their collections. 60 designers are accepted and are allowed to show their designs. Of these, 10 are selected and awarded prizes. It is one of the largest awards worldwide. He starts here and then goes to America. The American Consulate in Frankfurt supports this international event with all its might. According to Glööckler, this award for Frankfurt is what Fashion Week is for New York and to Hannemie Stitz-Krämer he said: „you make Frankfurt great again“. There’s nothing to add.

What sets him apart is his attitude that he leaves people all the way they are. Freedom in the creation of his works is particularly important to him. In an interview at the Frankfurt Style Awards, he gave his designers important information: „Let everyone do as they please. If you think you have to pull the bra over your sweater, do it. I don’t give a damn. I’m completely relaxed“.

Harald Glööckler has many talents. He says: „I regret nothing – I live my life the way I like it and the rhinestone occupied „Harald-Glööckler-Universe“ is far from exhausted“.

Often perceived as a bird of paradise and described as a jack of all trades, he shows everyone how it can work. With discipline, passion and a good portion of humor successfully to the goal. Often smiled at in the past, he has now arrived in his world and is happy.

We are looking forward to all new, creative, „pompous“ creations.