In: Entertainment
A charity song from Germany has made it into the first round of pre-selection for the most important American music award, the Grammy 2022. 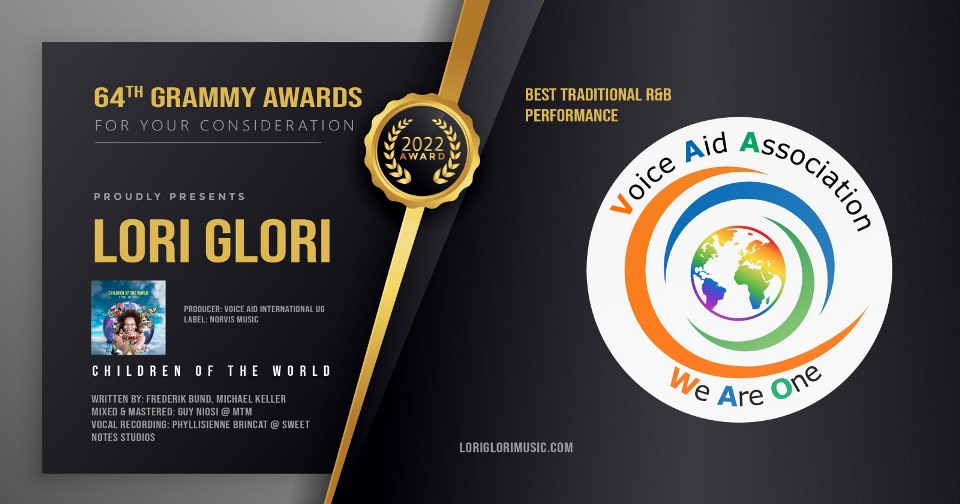 A Voice Aid Association charity song produced in Germany has been selected for the first phase of the shortlist for America’s most prestigious music awards, the 2022 Grammy Awards.

The song “Children of the World“, sung by Lori Glori, was produced by Astrid Arens, President of Voice Aid Association, together with her team and the Romanian label Norvis Music.

We were, of course, thrilled to hear this special news. For the first time in the history of the Grammy Awards, a song that is about the well-being of the world, that is a tribute to all the children of this world – whether big or small, and to all life on this planet – whether animal or plant, gets such an incredibly great opportunity to create attention for this.

The song “Children of the World” is intended to give support and a voice to all good people, all organizations that work for the environment and social issues, all companies that develop sustainable products and methods, all philanthropists who want the best for the world with a lot of knowledge and monetary support, all media that bring the truth to light, to stand up together for a better world.

Lori Glori is an international ambassador for the Voice Aid Association and supports it. With her equally strong, penetrating, soft and soulful voice of an experienced, life-affirming wife and mother, this song becomes a true firework of emotions.

Song producer Astrid Arens, when asked why this song is being resurrected right now, shared with us, “The time is now for people to stand up, to take action, to live and initiate change.”

Here is an original quote from the song:

„Give a helping hand to understand, so the dream will soon come true.“

It’s a great venture, a song that unites the world, an emotional firework that moves us and can do without more words.

“Children of The World” is part of the compilation “Save the Planet – Voice Aid & Friends“. With this network of internationally known musicians, Voice Aid goes around the world to inspire and ask people to take responsibility for our planet. Their two anthems “We Are One” by James Williams & the All That Band and “Children of the World” by Lori Glori are living credo of the Voice Aid Association.

Internationally renowned singer Lori Glori has submitted several tracks to the Grammy Academy in recent years. This year, in addition to “Children of the World,” the Grammy Academy’s music director selected two more of her songs: “Jungle Samba,” produced by Lori Glori & Sean Norvis ft. Fabricio El Latino, and “Count your Blessings,” produced by Lori Glori. He congratulated her for her hard work and for not giving up over the years, stated Astrid Arens, President of Voice Aid Association.

Lori Glori is a well-known personality in the music world who was born in San Francisco. Under her real name Lori Ham, she won the Miss Black San Francisco beauty pageant at the age of 17. She toured with Bill Summers and worked as a background singer with artists such as Lionel Richie, Stevie Wonder, Chaka Khan, Thelma Houston, Barry White, Midnight Star and Cameo. After moving to Germany, the artist performed with Jennifer Rush and became an important part of the DMP project in the 1990s, singing hits by Intermission (Piece of my heart), Major T. and Loft.