In: Events
Prince Albert II: "We are no longer alone in the struggle to preserve the planet." 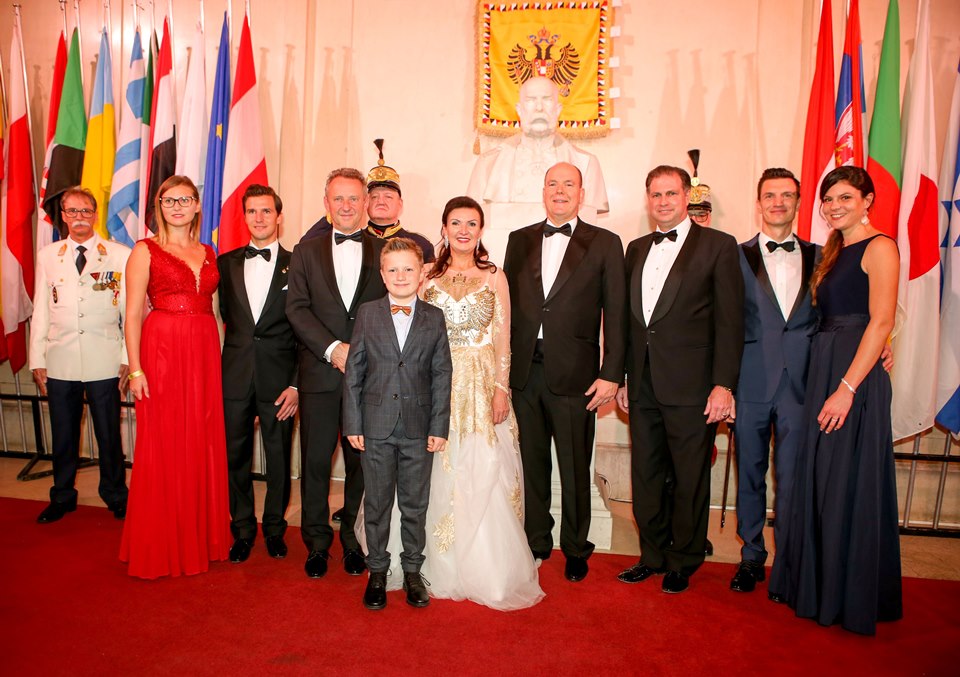 Vienna, 12 October 2019: On Saturday evening Prince Albert II of Monaco was honoured with the “Flame of Peace” by Herta Margarete Habsburg-Lothringen for his commitment to the environment and world peace. The award was presented during a charity gala in favour of the association “Flame of Peace” by Sandor and Herta Margarete Habsburg-Lothringen in the Vienna Hofburg. Among the 800 guests were numerous members of the international aristocracy, but also prominent local politicians, such as the first President of the Vienna State Parliament Ernst Woller and former Minister Werner Fasslabend.

The award „Flame of Peace“ under the patronage of Sandor und Herta Margarete Habsburg-Lothringen honours personalities who have rendered outstanding services to peace in the world and taken responsibility for people, countries, nations, cultures, nature and the environment.

Prince Albert II., the reigning Prince of Monaco and head of the Grimaldi family, was honoured with the “Flame of Peace” at a glamorous charity gala in the Vienna Hofburg. Herta Margarete Habsburg-Lothringen thus honoured the efforts of the Prince and his Foundation in the fields of environmental protection, sustainable development, climate change, renewable energies and biological diversity, reported Astrid Arens – The Voice.

Prince Albert II of Monaco with the “Flame of Peace”

“Since 2006, our foundation has been involved in more than 470 projects with a total volume of 55 million Euros. In 13 years, we have initiated numerous projects with 173 organizations and established 119 partnerships with organizations at the international level,” says Prince Albert II. This tireless commitment to climate protection is having an impact.

“There’s an energy that’s growing. A conscience that is awakening all over the world, from civil society to international organisations. Of course, there are still skeptics to convince, but we are no longer alone in the struggle to preserve the planet. And the commitments made three weeks ago at the United Nations Climate Change Conference in New York by many heads of state and government to acknowledge the urgency of climate change give me hope that much will change in the years to come,” Albert II stressed.

Herta Margarete Habsburg-Lothringen – Founder of the association ” Flame of Peace ”

Sandor and Herta Margarete Habsburg-Lothringen: “Prince Albert has made a great contribution to the promotion of peace, freedom and friendship in the world and is always committed to his country for the benefit of all Monegasque citizens and residents. He strives to make the world a better place for all of us”.

The Highlights of the Benefit Gala

Among the 800 guests at the Hofburg were numerous international personalities from the aristocracy and the international diplomatic corps. The supporting programme of the gala was correspondingly high-calibre. After the greeting by “World of Wonders” presenter Hendrik Hey, the ceremony took place, accompanied by an extremely colourful supporting programme. An excerpt of the highlights: Appearances of the association “I am OK“, the dancer of the dance school Elmayer and a Russian children’s ballet under the direction of Kirill Kurljaev and the Flame-of-Peace delegate for Russia, Irina Koljonen. The musical background of the gala was provided by the tenors Elek Zsolt and Laszlo Maleczky, as well as the Italian singer Fausta Gallelli, who sang the hymns of Austria, Monaco and Europe. The “Hymn of Children’s Tears” was performed by Tamara Trojani and Konstantin Schenk, while the children of the Russian ballet distributed small peace doves to the guests. There were also numerous performances from abroad, such as dances by 55 children from the Budapest school, musical performances by Severina Stoyanova from Romania, the Asian group FOWPAL, the Viennese Duo, Eudora Prise from the USA, Ivo Majer from Croatia and many others.

Speeches were given by Ernst Woller, the first President of the Vienna State Parliament, and former Minister Werner Fasslabend. The church blessing was given by Father Mag. Jan Soroka, Nuncio Alberto Tricarico and Bishop Camillo Ballin.

About the Association for the Promotion of Peace

The “Flame of Peace” is a non-profit association chaired by its founder Herta Margarete Habsburg-Lothringen. The association is active worldwide with various aid projects to build friendships that unite nations, to strengthen peace and freedom, and to promote awareness of values, culture and tradition. Herta Margarete and Sandor Habsburg-Lothringen invite all country representatives as well as people with responsibility to the annual benefit gala “Flame of Peace” in order to review this commitment once a year and present it to the public. With the net proceeds of the events, peace projects of the association “Flame of Peace” will be supported. The association is a non-profit and non-partisan, as well as religion-independent association for the purpose of the promotion and honor of peace-making activities and persons, who make themselves earned around the peace in the world. It serves the development of the information network and the exchange of conflict resolution and peace-building ideas. The symbol of the association is the “Flame of Peace”.