A benefit concert and a raft race for a good cause 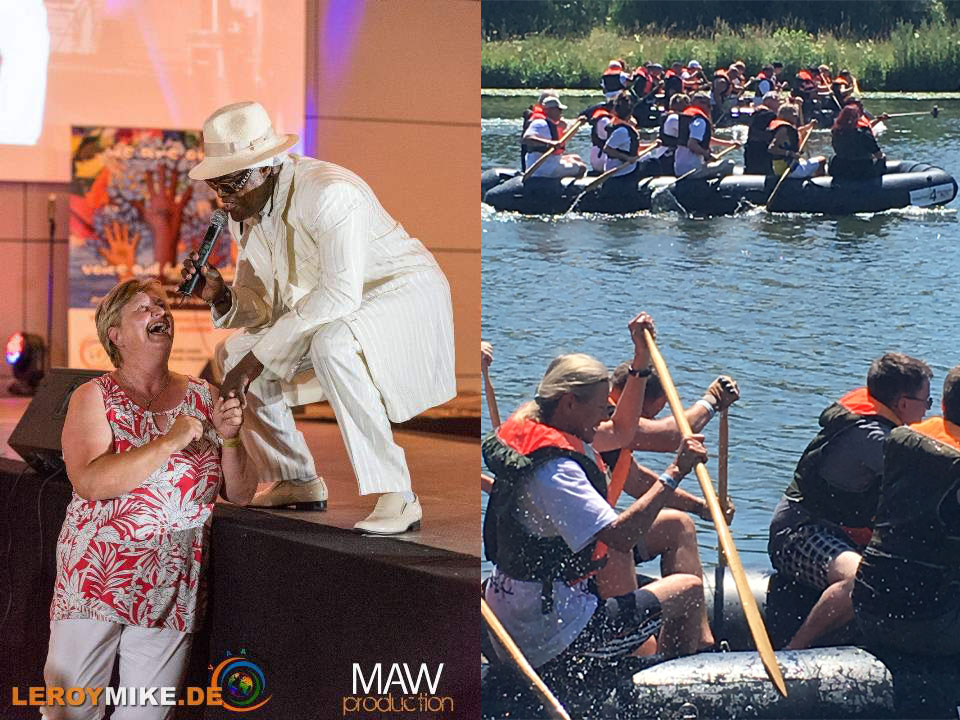 Schweinfurt – on 30 June 2019 the Voice Aid concert premiere took place on the Main Island and on the Gutermann Promenade the 11th Rotarian Rowdy River Raft Race took place. Schweinfurt was upside down.

Early in the morning the first spectators and participants of the 11th „Rotarian Rowdy River Raft Race“ arrive at the Gutermann Promenade in Schweinfurt. Hundreds of paddlers with their fans and several thousand spectators lined the banks of the Main River at this folk festival, which is particularly suitable for families, companies and crazy people.

The day was a complete success and the fairness and friendliness with which the “Rotarian Rowdy River Raft Race” on land and on the water was celebrated this year was grandiose and unique.

Lori Glori, an internationally known singer, led the artist boat of Astrid Arens, chairwoman of the Voice Aid Association e.V., which had its benefit concert premiere on the Main Island in the afternoon. Lori Glori was the absolute eye-catcher for many and everyone was looking forward to the following concert on the Main Island to experience Lori live on stage.

At 16:30 the concert premiere opened with a press conference in the forum of the Mercure Hotel. Mrs. Monika Remelé, patroness of the concert, spoke very emotional opening words and was looking forward to a special concert evening. Lori Glori and Joe Cocker & Tina Turner Feeling answered the questions of the press. Josiah Bruce moderated and all other Voice Aid supporters were present.

Special thanks go to Radio Primaton – Regiomedien Unterfranken – and its team. Beside Felix Straube (program manager) Christian Schwarz (moderator), Robin Konka (moderator), Christoph Metz (media consultant) and many others were fully in action. They were on site from morning until evening and broadcast the entire event live, in the spirit of the good cause.

VSL Veranstaltungstechnik, represented by Managing Director Sebastian Vollert, as a long-established Schweinfurt company, was also committed to the special success of this benefit concert, as was Deutsche Bahn represented by Peter Weber, the city of Schweinfurt, the Hotel Mercure, the Rotary Club Schweinfurt Peterstirn, Arinda GmbH, the Business-Voice-Magazin and many helping hands around the day.

The organizers promised inspiring artistic diversity, first-class performers and a wonderful emotional evening. This promise was kept, the audience was totally thrilled and celebrated their artists with thunderous applause.

Mrs Remelè opened the concert with a motivating speech for a good cause. She would like to support children from the orphanage and give them a good time. Physical activity and good nutrition are important to her and Voice Aid promised her direct support.

James Williams, Head of Music at Voice Aid, musically opened the concert evening with his band All That and really heated up the audience. Then it went on with Robell Parker and Lori Glori, who thrilled the audience with their Pop and Soul songs.

Another special treat was the world premiere of the song “We Are One”, which also describes the meaning of Voice Aid in particular. James Williams & Friends have put it on its way.

During the break it was possible to take pictures with the internationally known stars, to talk to them personally and to exchange ideas. The fans were totally exhausted. That was new in Schweinfurt.

For Voice Aid, however, this is part of the concept. All Voice Aid Stars are also Voice Aid Ambassadors and carry the Voice Aid messages around the planet. We stand for more humanity and environmental protection – for the sake of people and the planet,” said Astrid Arens, Chairwoman of Voice Aid.

The second part of the concert was opened by the Weather Girls, known for their worldwide famous song “It’s raining man”, followed by “Mr. California” Dante Thomas and Joe Cocker & Tina Turner Feeling. The audience raved, danced and enjoyed the rocking sounds of the artists.

Some audience interviews confirmed the impression that it was very professional, the music was great and especially the mix of artists was great. There was something for everyone. That’s exactly how it should be.

Regino Hawich, Voice Aid board member, was very pleased with the evening and said: “What a great atmosphere, what awesome people. Thanks to Schweinfurt and all the people who celebrated with us and made it possible for this event to take place”.

Besides, we have to thank you:

An all around successful evening, which gave us many special memories. We will certainly hear and see a lot more about Voice Aid. They want to make a difference and will go their own way unswervingly.