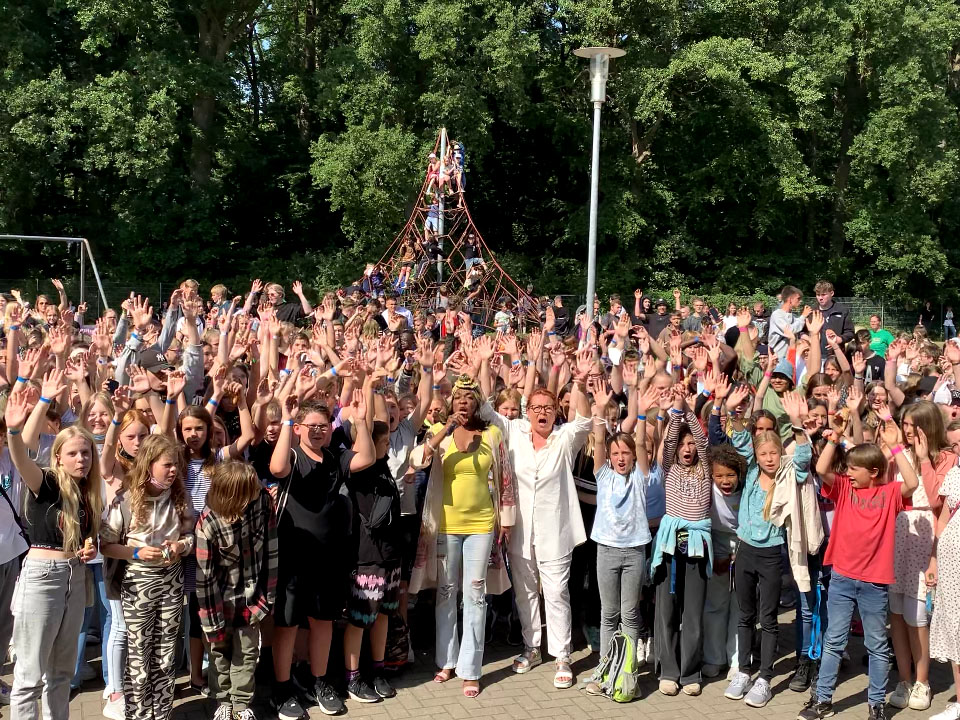 On 23.06.22 the unique event series of Voice Aid, the Schools in Concert Tour, started for the first time across Germany. This free concert series in schools, with internationally and nationally active singing stars, was combined with the call to take more responsibility for environmental protection and sustainability. Schools can apply to Voice Aid for this, but commit themselves to proving or even expanding their environmental commitment.

Internationally and nationally known musicians make a statement for more humanity, love, peace, environment and the protection of the planet in German schools.

The US singer Lori Glori, who traveled especially from San Francisco to Germany for this concert series, was our main act. She is an ambassador for Voice Aid here in Germany and the USA. She is an absolutely gifted singer of the old school and sang for us the hymn “Children of the World”, with the equally strong, penetrating, soft and soulful voice of an experienced, life-affirming woman and mother.

In no time, she captured the audience for herself. Students and teachers alike were enthralled by her passion for singing and her warm way of interacting with the audience. The Lori Train was legendary in all the schools where she was and the autograph lines were incredibly long. In an interview, Lori Glori said, “This tour is something wonderful and a gift to me. To sing with all these kids, to be on stage together, moves my heart. I love Germany.”

Astrid Arens informed us: “The children from the school in Burg named Lori Glori the “Queen of Voice Aid Schooltour”.

Furthermore, the tour has provided valuable support: the German-speaking singer Madlen. In Berlin, Möhnesee, Guben and in Prenzlau this young up-and-coming artist performed her songs. With her partly rappy sound, she appealed very well to the students and convinced them.

James Williams, Voice Aid’s Head of Music, supported the concerts with the Voice Aid anthem “We are One” and songs by Michael Jackson and Co. in Möhnesee, Eppelborn and Groß-Bieberau. James Williams said, “Wow, the atmosphere was so cool at these concerts, wonderful.”

All schools were enthusiastic about this unique and great concert program with integrated calls to do something for the environment, the climate and the planet.

For most of the events, the engineering was firmly in the hands of Robert Rasid, head of the Audio Vita association.

Voice Aid Association President Astrid Arens said, “Without the great cooperation of the schools, it would have been impossible to put on this great school concert tour. They deserve a huge thank you.”

In addition, each participating school planted a tree symbolic of the preservation of our world, greater respect for nature and better environmental protection. Each tree planted is included in an international Tree Peace chain, which receives its own “Hall of Fame”.

At the same time, a symbolic euro was voluntarily donated by the participants to support an exciting environmental project in Tanzania. The oceans and beaches there are cleaned of plastic waste, which is then recycled and flows back into the cycle in new products.

In addition to countless positive moments, Voice Aid was also able to avoid a few pitfalls during its tour. In addition to the cancellation of a main sponsor, there were failures on engineering level by Corona, and some of the confirmed artists unfortunately had to stay away, partly for health reasons. A cancellation or reduction of the school tour concerts was already being considered. After consultation with all schools, the initial obstacles were well overcome in agreement with all participants and the school tour could take its course as planned. Despite all the excitement, everyone was happy and enthusiastic about this extraordinary concert series and the commitment of Voice Aid.

Voice Aid would like to thank the State of Brandenburg, the Ministry of Education, Youth and Sports for its unrestricted support of the School Concert Tour 2022 as well as the Lotto Foundation Rhineland-Palatinate.

We wish Voice Aid continued success with this project and hope to see some more concerts next year.

„The Queen of Voice Aid Schooltour 2022“